Apartments for rent in Lodz , Poland

The third largest city in Poland. The capital of the Lodzkie Voivodship. It used to be a factory district. Today, thanks to the revitalization that the city is currently undergoing, the city is regaining its former glory. If you are a fan of renovated tenement houses, you will surely find your place here.  The city of Lodz is developing very quickly. It is especially known as an academic city. Proximity to Warsaw makes more and more companies open their branches here. (By train from Lodz to Warsaw, you will get from the Lodz Fabryczna Railway station in just over an hour. As a result, many people live in Lodz and work in Warsaw. The city is also the most investor-friendly. 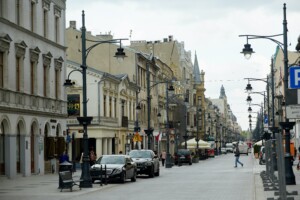 A districts with apartments for rent in Lodz:

Apartments for rent in srodmiescie Lodz
Srodmiescie is the most important district of the city – in short, it is simply the city center. It is in this district that you will find all historical places in Lodz as well as cultural ones – such as theaters or a manufactory – an old huge factory converted into a shopping center. In this district of the city there is also the aforementioned Piotrkowska Street, i.e. the city’s showpiece – Generally it can be divided into two parts – the eastern part which is filled with restored tenement houses and the western part which is much larger – filled with skyscrapers from the 1970s. especially appreciated by foreigners.

Along with the development of the city, a lot of new apartments for rent in Lodz are also being built here. The buildings are new and their area is fenced, each of them also has an elevator.

Of course, the price of renting an apartment in Lodz depends, as always, on the standard of the interior of the apartment and its location. People from abroad usually value apartments located in the city center due to the proximity of cultural attractions or shopping centers.

At the moment, the average rental prices for flats in the city of Łódź are as follows (bills are not included in the price):

Everyone in this city will find something for themselves. The range of possibilities for spending free time is really wide.

Are you planning to study or work in Lodz?

If you are looking for an apartment for rent in Lodz, check our offers. Did you not find the apartment you are interested in in our offer? Contact us and specify exactly what you are looking for, in which district and for what period of time. We will try to find a flat for you that will meet your expectations. We reply as soon as possible!

How to study in lodz?